In June 2015, the National Commission on Muslim Filipinos (NCMF), in partnership with the Provincial Government of Palawan (PGP), and the United Muslim Communities in Palawan for Peace and Progress (UMCPPP) launched the Access to Justice Network (AJN) Program under the EU-Philippines Justice Support Programme II (EP JUST II).  The AJN is an initiative of the NCMF, EPJUST II , the Provincial Government of Palawan and the UMCPP, to provide Muslim Filipinos the capacity to address their legal issues through access to referral pathways.

The AJN aims to have a coordinated justice delivery mechanism to ensure that justice is delivered to communities, particularly to the marginalized.  The services to be provided by the AJN include system of assistance, paralegal assistance, case assessment assistance, and basic legal assistance.  The AJN is to be composed of 3-5 people who will help in the justice delivery within the local government.  The EPJUST II has donated IT equipment to selected beneficiary communities under the AJN program to monitor the progress of the establishment of the AJNs and to improve delivery, response and coordination of justice and legal services for the constituents of Palawan. 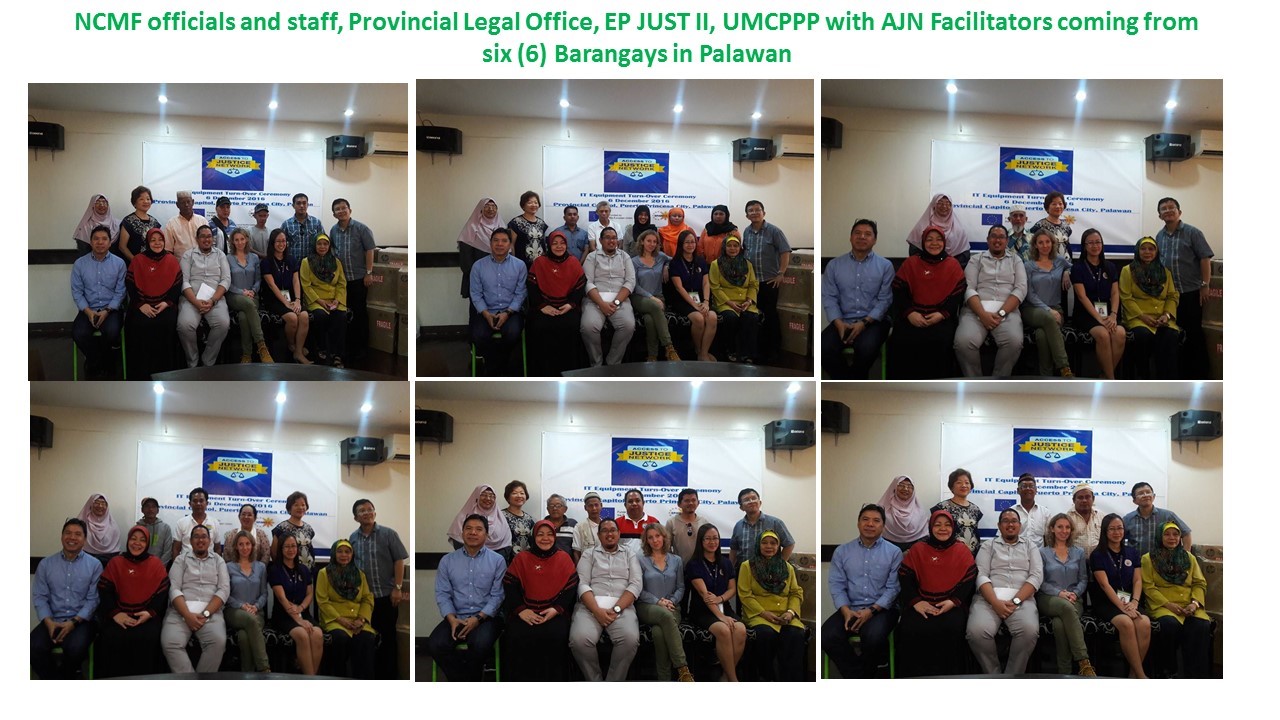 On 06 December 2016, the NCMF turned over to AJN centers thru the Provincial Government of Palawan the said IT equipment intended for  the initial six (6) beneficiaries in a ceremony held in a conference room, in the Provincial Capitol of Palawan located in Puerto Princesa City.

The Provincial Government of Palawan was represented by Atty.  Grace N. Mana-ay of Provincial Legal Office. She thanked the EPJUST II and NCMF for their continued support in the AJN program for the selected communities in Palawan.  She mentioned that there are only four lawyers in their office who are handling legal assistance for communities in the whole province. As such, they are thankful that through AJN program, some communities in Palawan can benefit from established AJN Center in the barangays with trained AJN Volunteer Facilitators from the community who provide assistance responding to legal queries, relaying concerns to or seeking clarification from relevant government or non-government organizations in their locality.  Atty. Mana-ay assured that the Provincial Legal Office will provide support and assistance to the AJN centers.

NCMF Commissioner Atty. Mohammad Al-Amin Julkipli said that the NCMF will endeavor to support the institutionalization of AJN Centers in Palawan especially on the technical and sustainability aspects. He hoped that more Muslim communities will benefit from this program not only in Palawan but also in other areas.  Commissioner Aisha Flores Malayang acknowledged that the AJN program has contributed in improving the awareness of the communities of their rights and available legal remedies, but there is also need for them to improve their technical skills to be able to effectively run the AJN centers in their communities. She added that the provincial government should provide training on information technology to enhance capacity of the AJN facilitators further.

Atty. Joey Mendoza of EP JUST II congratulated all AJN facilitators from the selected barangays for their continued efforts and support in the operation of AJN centers.  He mentioned that in October of 2015, EPJUST II trained 60 volunteer facilitators from ten pilot barangays in the province of Palawan. Each barangay has been equipped with a comprehensive Standard Operating Manual and substantive guidelines. Since the initial training was delivered, they have made significant progress, as five physical centers out of the ten Barangays have been established.