The Bureau of Peace and Conflict Resolution (BPCR) shall primarily be responsible for the conduct of peace and settlement of conflict among Muslim Filipinos and shall likewise participate in the national peace process efforts, particularly for Muslim Mindanao. It is aimed to prevent, de-escalate and find solution to conflicts by peaceful means.

The Bureau of Peace and Conflict Resolution (BPCR) takes the lead role of NCMF in advocating for Peace and resolving conflict in Muslim Filipino Communities.

The Bureau also participates in Peace Process programs of the government, conduct and participate in inter-faith dialogues in the localities.

The Bureau of Peace and Conflict Resolution (BPCR) is composed of two divisions to manage its operations, namely:

Attended the second anniversary of the signing of the Comprehensive Agreement on the Bangsamoro (CAB), 28 March 2016

Submitted comments to the draft report of the UN Special Rapporteur on internally displaced persons to OPAPP (inter-agency coordinator), 11 April 2016

On November 17, 2016, a forum on “Exploring Correspondences between International Humanitarian Law and Islamic Law related to armed conflict and their relevance in the Southern Philippines” was conducted under the joint sponsorship of the International Committee of Red Cross (ICRC), the University of the Philippines – Institute of Islamic Studies, and the National Commission on Muslim Filipinos (NCMF) through Bureau of Peace Conflict and Resolution (BPCR) at Balay Kalinaw, University of the Philippines Diliman.

The Office of the Presidential Adviser on Peace Process (OPAPP) together with the National Commission on Muslim Filipinos (NCMF) (mainly through the Bureau of Peace and Conflict Resolution and NCMF Davao Office) and in coordination with the Office of the Cabinet Secretary, organized and hosted a two-day peace and development summit dubbed as “National Peacebuilding Conversations,” on 14-15 October 2016 at Royal Mandaya Hotel in Davao City. The summit is intended to ensure that there will be a convergence approach among major stakeholders in the achievement of the Administration’s Peace and Development Agenda.

By virtue of Proclamation No. 675, September of every year is being celebrated as the National Peace Consciousness Month. For this year, the Office of the Presidential Adviser on the Peace Process (OPAPP) and the National Commission on Muslim Filipinos (NCMF), in particular, the Bureau of Peace and Conflict Resolution, collaborated in holding the PeaceTalk Campus Tour in various colleges and universities across the county.

In August 2016, the first Access to Justice Network (AJN) oversight committee meeting on the implementation of AJN centers in ten baragays in Palawan was held at the Provincial Capitol, Puerto Princesa City, Palawan.

Research project on pluralist justice, women and peacebuilding in the Bangsamoro

In April 2016 Memorandum of Agreement (MOU) between the Australian National University (ANU) and National Commission on Muslim Filipinos (NCMF) thru office of Commissioner Aisha Flores- Malayang in coordination with NCMF regional offices in Zamboanga, Sulu and Cotabato to conduct a research project on pluralist justice, women and peacebuilding in the Bangsamoro areas. From May to June 2016 the NCMF personnel conducted the actual survey in the cities of Zamboanga and Cotabato and in the provinces of Basilan, Sulu, and Tawi-Taw 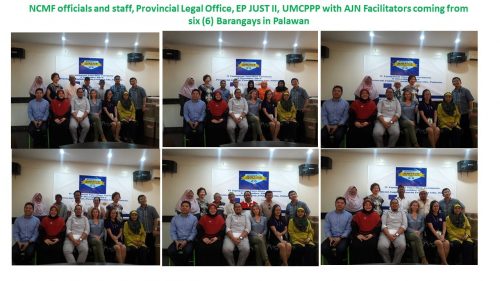 IT equipment turned over to AJN beneficiaries

In June 2015, the National Commission on Muslim Filipinos (NCMF), in partnership with the Provincial Government of Palawan (PGP), and the United Muslim Communities in Palawan for Peace and Progress (UMCPPP) launched the Access to Justice Network (AJN) Program under the EU-Philippines Justice Support Programme II (EP JUST II).