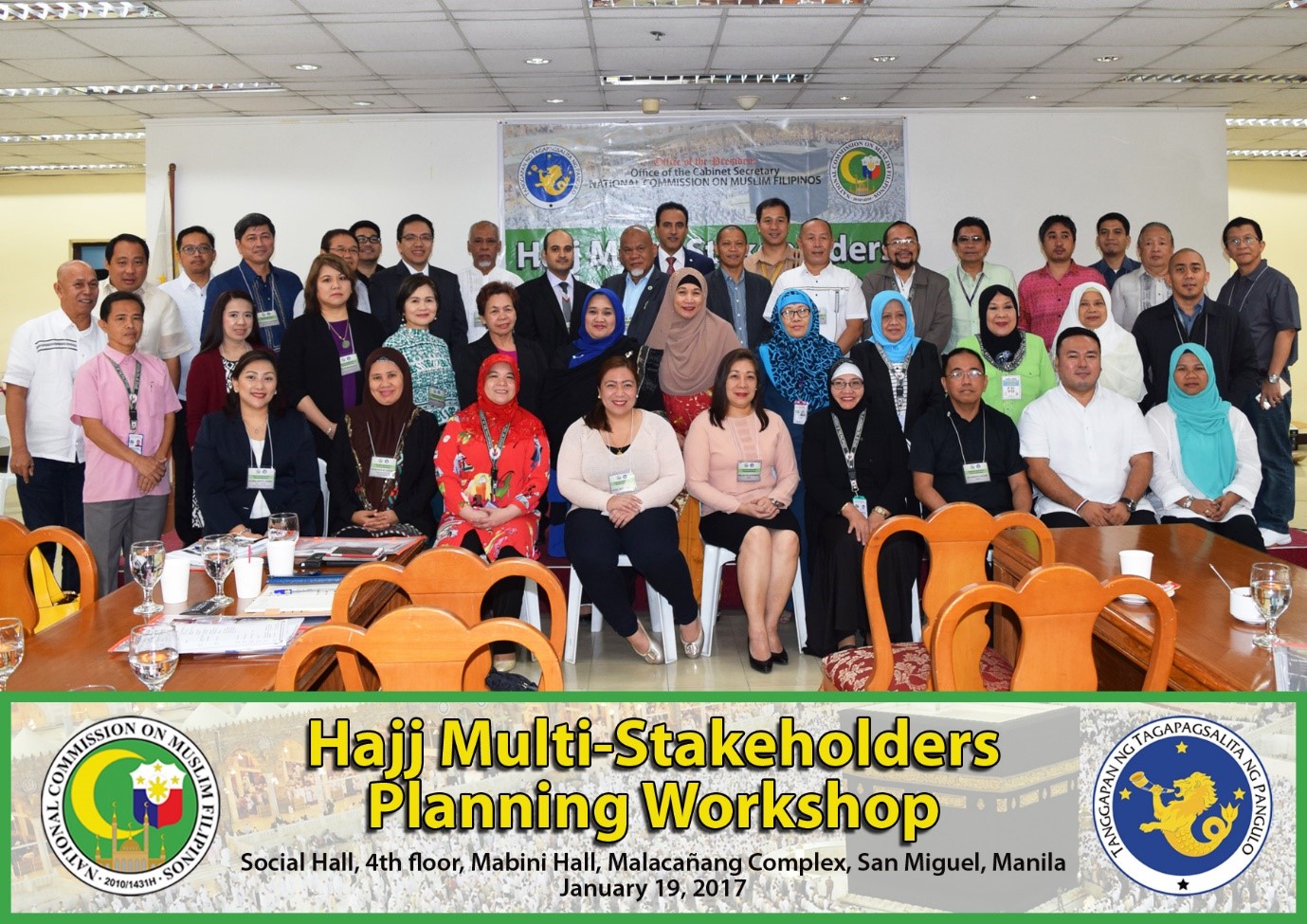 The National Commission on Muslim Filipinos (NCMF) together with the Office of the Cabinet Secretary (OCS) facilitates jointly in the arrangements of the Hajj Multi-Stakeholders Planning Workshop, which was held in January 19, 2017 at the Social Hall, fourth floor, Mabini Hall, Malacañang Complex, Metro Manila.

The Hajj Multi-Stakeholders Planning Workshop is arranged to bring all stakeholders together to jointly collaborate in identifying the systems, policies, and procedures in administering, managing, supervising the annual Hajj with the end product of generating sustainable policies and direct actions that can be implemented by concerned government agencies to ensure smooth and hassle-free Hajj operations.

Also, the planning workshop is intended to make the NCMF, other concerned government agencies and the public aware of the systems, policies and procedures of the Hajj operations. Finally, the workshop is also arranged to devise strategies to address the gaps in the hajj operations in the Philippines and in the Kingdom of Saudi Arabia.

The workshop started with a Du’a prayer led by Commissioner Abdulhadi Daguit, followed by the welcome messages of Atty. Maia Chiara Halmen Reina Valdez, Undersecretary of the Office of the Cabinet Secretary, and Commissioner Yusoph Morales.

Atty. Maia Chiara Halmen Reina Valdez, one of the undersecretaries of Office of the Cabinet Secretary, welcomed the participants and stressed the need to find ways to improve the services provided for the pilgrims. She emphasized that, “we should take this opportunity to be of service to our Muslim brothers and sisters; let us be partners for change and partners for our fellow Muslims in their spiritual journey to Hajj. Let us keep them in mind as we work on our goal to provide them with smooth and hassle-free hajj processes.”

Correspondingly, Commissioner Yusoph Morales welcomed participants and thanked Secretary Leoncio Evasco Jr for giving the opportunity to address the problem with the Sheik.

He took pride of the accomplishments of the Lao administration in providing the best services for the pilgrims in 2016. However, “much is yet to be done for us to provide a smooth and hassle free hajj. This is precisely why we need to gather various stakeholders on the belief that the hajj should be a common undertaking by all government agencies and relevant stakeholders,” he explained.

Christian Zaens, the executive director of the Institute for Solidarity in Asia (ISA) and resource person for the workshop, discussed the workshop mechanics and four points that were identified by NCMF which are: a. Hajj Conference, b. Hajj Awareness Program (HAP), c. Travel Logistics, and d. Vaccination. He noted that the solutions to these are in the hands of both NCMF and non-NCMF actors. In the discussion, he presented the importance of the exercise, emphasizing on convergent solutions to bridge the gap between the “current state” is and the “ideal state” is. He also added that the ideal state will be quantified to put in a performance metric, and then it will put into a joint commitment.

He told the participants that the signing of the joint commitment will be initiated by the Office of the Cabinet Secretary, which will serve as the background in the creation of a Technical Working Group (TWG). The TWG will have the stakeholders of the planning workshop as members. He added that the outputs from the workshops will serve as the point of departure of the TWG in their work to monitor, evaluate, and improve the Hajj operations in the Philippines.

The breakout session was divided into four clusters in which members were already predetermined prior to the day of the workshop. Per cluster there will be one documenter and one leader who will steer the conversation until a convergent solution is produced, in the form of direct action and policy action.

The workshop on the gaps in the hajj operations brought up the often problem in the monitoring of the activities of the sheiks. Issues on the budget, information dissemination, accountability, and transparency were also taken up in the breakout sessions.

Outputs of each cluster were presented using the template that was developed by ISA after several meetings with the NCMF Secretariat. Several policy actions and direct actions were laid out in the presentation of outputs, which is tantamount to commitments by the members of per cluster.

It is important to note that, in the middle of the presentation of outputs, USEC Atty. Emilly O. Padilla of the Department of the Interior and Local Government (DILG) came in to give her support for the pilgrims and NCMF.

Some of the key workshop outputs that have been observed are the following:

In general, the Hajj Multi-stakeholders Planning Workshop is a success for being able to meet its general objective, “generating sustainable policies and guidelines which can be implemented by concerned government agencies.”

In the Islam religion, Hajj is an annual pilgrimage to Mecca, the birthplace of the Prophet Muhammad. To sign up for the hajj pilgrimage requires having a hajj passport and a Sheik to lead the pilgrims once in Saudi Arabia, thus the demand for travel agencies to process pilgrim applications and Sheiks. However, as with any other demand, exploitation comes in many forms when various stakeholders come into play; and despite the Commission’s attempts to monitor these agencies and sheiks, the risk is borne by the potential pilgrim.

Correspondingly, the closing message by USEC Valdez was a very heartfelt one:

“I’m a Catholic, my dad is a Muslim, my grandparents are Muslim, and one thing they shared with me is that Halmen, there is no compulsion in religion. Islam means peace. More than tolerance, let us give each other mutual respect. Perhaps that’s the meaning of Hajj for all of us. We may not share the religious aspect of it, but let us give our Muslim brothers and sisters, the respect they the long deserve and this government let us endeavour to do whatever it takes bring peace in this country; by first giving them accommodation, making these processes more accessible to all of them. Enclosing may I invite you to regularly communicate with each other, to keep the lines open, to constantly uplift the standards of the service in the hajj process so that one day, the Philippine hajj operations can be best practice for the world can learn from. This is our vision and with your collaboration this can be achieved. Again, I congratulate you all for your efforts to provide strategies and solutions to uplift the hajj operations in the country and we look further to working with you in the realization of this vision.”

She also stressed that “the Office of the Cabinet Secretary clamour that the commitments that we have reached upon be institutionalized in your respective organizations and agencies through continuous process improvement vis-a-vis hajj operations your agencies is involved in.”

Given the prominent role of the National Commission on Muslim Filipinos has played on the matter of Hajj through the years, and the adverse event that took place in 2016 wherein 177 Indonesian nationals were found to have obtained Philippine passports fraudulently, many private and public sector observers will watch closely how the Commission will figure on this year’s Hajj operations, under President Duterte’s watch. Hence, the Hajj Multi-stakeholders Planning Workshop serves as an attestation to the Commission’s commitment to uphold the well-being of the Muslim Filipinos.