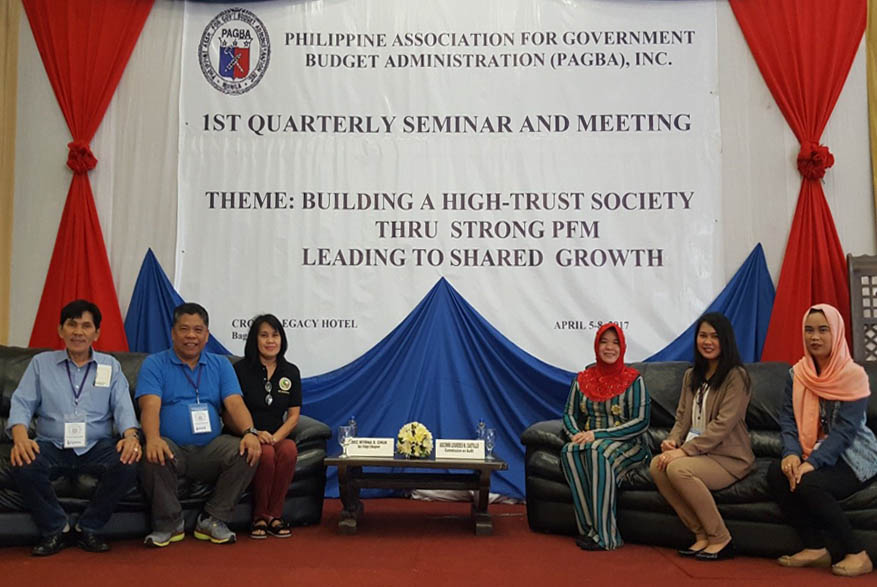 The National Commission on Muslim Filipinos (NCMF) actively participated in the 1st   Seminar and Meeting organized by the Philippine Association for Government Budget Administration (PAGBA), Inc. held in April 5-9, 2017 at Crown Legacy Hotel, Baguio City. The NCMF team consisted of two representatives from Planning Service, three from Finance and Management Service, and one from Administrative Service.

This year’s theme was “Building a High Trust Society Thru Strong Public Financial Management (PFM) Leading to Shared Growth”.  It is believed that with effective set of rules, laws, systems, and processes there will be efficient, accountable, and transparent public service delivery.

The large number of PAGBAns, as the board of the directors called the attendees proved that distance was not an issue. Over 900 participants went to Baguio for the PAGBA, having survived the roads that were full of twist and turns, mostly inclined, and rarely flat. Not only did the participants get to learn new budget resolutions and government proposed programs, but they have also been spared from the scorching heat of Manila.

Generally, the PAGBA meeting and seminar is an annual activity wherein government agencies are invited to learn about the updates on government programs, projects and activities with budgetary implications. For this year, Secretary Yasmin Busran-Lao, after having carefully reviewed the programme, decided to bring together as one team, the key players involved in planning & budgeting of the Commission, such as  the Planning, FMS and Admin to participate in the PAGBA; and she was right. For example, in the topic New PBB Guidelines for FY 2017, the performance management team consists of the planning officers, human resource management, and budget officers. Likewise, the PAGBA Board of Directors confirmed that the seminar was not exclusive for budget officers, but also for planning officers and the administrative officers.

Moreover, the PAGBA serve as a platform for presenting issues and problems being faced by government agencies. For instance, the issue on disallowances, dormant accounts, compliance with the PBB guidelines, and the relationship between the budgeting and planning were among the issues that were tackled during the open forum. Every presentation was succeeded by an open forum. At the open forum, participants are welcome to ask questions, related to the topic, to the resource person. Indeed, knowledge is shared and knowledge is being built in the PAGBA Seminar and Meeting. 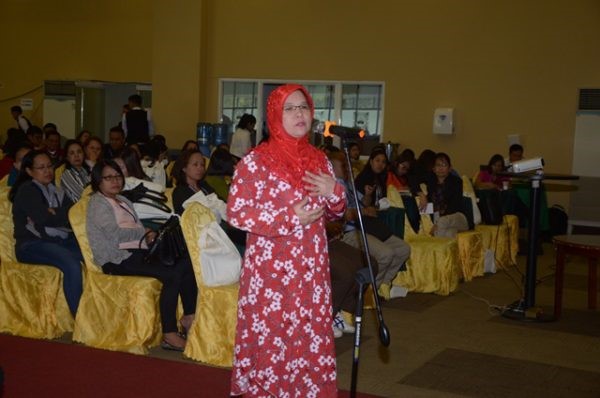 Among the highlights of the PAGBA Seminar and Meeting were on Federalism, the Data Privacy Act, New PBB Guidelines for FY 2017, and Health and Wellness.

On Federalism, Councilor Ronald R. Barcena of Antipolo City discussed some features of Federalism – its origin, typologies, advantages and disadvantages, and the promises of its implementation in the country. It must be noted that Federalism has been proposed to decentralize the power of imperial Manila. There are hesitations for its implementations considering the large economic disparity among regions and it is supposed to encourage political dynasty and worst, break off from the south. However, Councilor Barcena believes that “the most important key to Federalism is discipline.”  Through the discipline of each citizen, the goal of uplifting the living conditions of the Filipino people and full development of the country will be achieved.

The following are the proposed states with their respective capitals:

The NCMF was recognized among the national government agencies (NGAs) as having cascaded the information on the New PBB Guidelines for FY 2017 to its agency. According to SVP Magdalena L. Mendoza, there is a significant improvement of compliance to good governance policies. 99% of the NGAs have already complied with good governance standards – Transparency Seal, PhilGEPS Posting, Citizen’s Charter, SALN submission, COA requirement on the report of aging of cash advance, Quality Management System (QMS) Manual, Annual Procurement Plan (APP), and the Agency Procurement and Compliance and Performance Indicator (APPI). SVP Mendoza emphasized that the PBB is important to be cascaded from top to bottom so that even at the individual level, they understand what their contributions are and at the same time the specific task that they were able to performed will be rewarded with a bonus.

Another new feature of the PBB Guideline for FY 2017 is the delegation of the responsibilities to other department/office of an agency, breaking off with the old wherein the focal person is fully in-charge of the compliance of his/her agency.

In addition, it is important for the NGAs to have the Results-Based Performance Management System (RBPMS) with the Office Performance and Commitment Review (OPCR) and Individual Performance and Commitment Review (IPCR) harmonized as these impacts the achievement of the national goals of the President. It must be noted that the President Rodrigo Duterte strictly instructed that frontline services should be streamlined and that projects should be able to uplift poverty and the living conditions of the Filipino people.

Commissioner Raymund Liboro of the National Privacy Commission (NPC) once said that “in the face twenty-first century crimes, we need a 21st century law that upholds data privacy – the Data Privacy Act.” The Data Privacy Act (DPA) is a law intended to protect citizen’s right to privacy through “responsible handling of data.” Government agencies are mandated to collect personal information from its citizen and with this come great responsibility in processing and handling of data. Not only government agencies, but private agencies are accountable to people if their data falls under other people’s hand.

Five directives were put forward by Commissioner Liboro for data security that should be completed by all agencies in the country. The directives are namely: a) Appoint your Data Protection Officer (DPO), b) Conduct your Privacy Impact Assessment, c) Create your Data Privacy Manual, d) Implement Data Privacy and Security Measurement, and e) Be Ready In Case of Data Breach.

Personal data should be treated like gold that can’t be easily given away. Commissioner Liboro pointed out that we should change the culture of easily giving away our personal data, in exchange for a free umbrella. The collected data may be used to hack credit card accounts, social media accounts, and even emails while sometimes it is being used to forecast customer behaviour.

DOH Assistant Secretary Eric Tayag started his lecture by emphasizing that “the quest for health and wellness is never ending.” He presented a picture of a healthy 89 year old Japanaese woman who is being studied by scientific experts to learn the secret to her long and healthy life.

According to ASEC Tayag, there is no such thing as healthy food. Eating beyond the identified quantity of food by nutritionist would construe unhealthy food, if one followed the concept of “healthy food” as discussed by ASEC Tayag.

Government employees are the most stressed people. Stress is brought by less sleep and too much work. To alleviate stress, a person should at least have a minimum of 6 hours of sleep in order to function well according to ASEC. Tayag.

There are many important health and scientific facts shared by ASEC Tayag, but the most important is on maintaining a healthy body through eating less sweet food and performing exercise.

ASEC Tayag ended his presentation with a request to dance. He is well known for spreading the benefits of healthy diet and exercise through dancing.

Other topics of the PAGBA Seminar and Meeting are Updates on the Proposed Tax Reform Program, Cash Management, Philhealth Benefits, Updates on Government Accounting Manual and other Accounting Reforms, Updates on the Implementation of E.O. No. 201 Series of 2016, Guidelines for the Release of Funds for FY 2017, and Institutionalization of ISO 9001 QMS.