Dedicated to improve the processes and services of the Commission, the Administrative Service, in coordination with the Planning Service, conducted an orientation-workshop on Quality Management System (QMS) on May 30, 2017, 1:00-9:00pm at the University Hotel, UP Campus, Diliman, Quezon City.

The Commission invited Mr. Armando Flores Sibal, acting department manager of Local Water Utilities Administration (LWUA) as resource speaker for the workshop. His knowledge was a banquet, and if participants remained full enough, they would be able to stay and feast.

In the opening remarks, Executive Director (ED) Lidasan, expressed his appreciation and thanks to Director Haidee Ampatuan, Planning Service Director, for her persistency in trying to uplift the Commission. 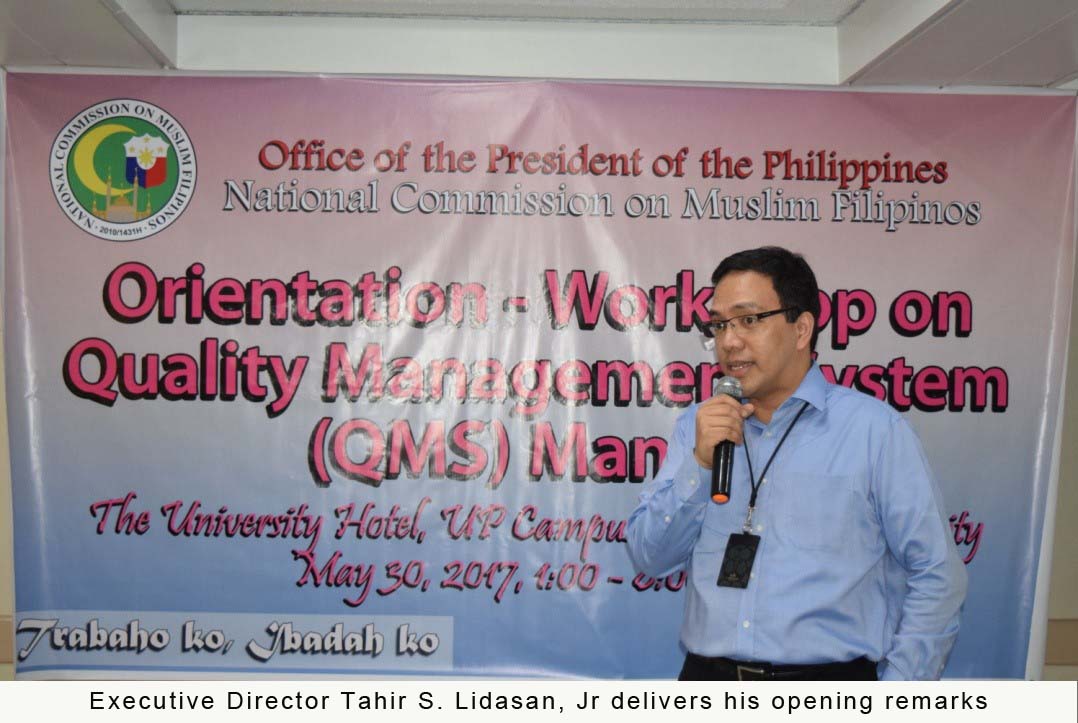 ED Lidasan also pointed out that on the recent meeting arranged by Secretary Evasco he was surprised by the gesture of respect given to him; for despite all the problems and issues being faced by the Commission, they have him seated with the core officials during the meeting regarding the Marawi crisis. Such small gesture is good for the image of the Commission, he added.

ED Lidasan also highlighted the need to uplift the Commission’s processes, by instilling a system wherein the processes can be monitored and evaluated if they are effective and responsive to the needs of the Muslims. ED Lidasan further mentioned that there is a need to work fast as the President Duterte is a man of action, he wants outputs.

The Commission is uplifted when each office or bureau do their job diligently. ED Lidasan took the Planning Service Director as an example of someone who has been working diligently for the Commission. The full potential of the Commission, however, will not be achieved by the Planning Service alone. There is a need for convergence effort by all the bureaus and offices in order to uplift and upgrade the Commission. As a final word, ED Lidasan pointed out that the seminar-workshop will serve as a venue wherein the Commission will build and design its management process to easily determine whether the current process is effective and efficient.

In the introduction of resource speaker, Director Haidee Ampatuan discussed briefly on the importance of having the QMS training and workshop. She expressed gratitude to the Honorable Secretary for supporting the QMS initiatives. In addition, she also gave updates on the status of the Commission’s PBB eligibility

Director Araman Belleng, on the other hand, delivered the closing remarks. He thanked the Secretariat and the resource speaker for a very productive workshop. He also expressed the beauty of having workshops wherein the operations of each bureau, office, and services are being revisited. Dir. Belleng also led the awarding of certificate of appreciation for Mr. Sibal. Certificate of participation were also given to the participants.

Mr. Sibal opened the seminar-workshop by asking the participants on the value of the QMS for the Commission. According to him, QMS talks about a process triggered by a need, where the objective is to serve the NCMF’s clientele. The aim of the workshop, according to him, is to make the NCMF appreciate and understand the QMS. 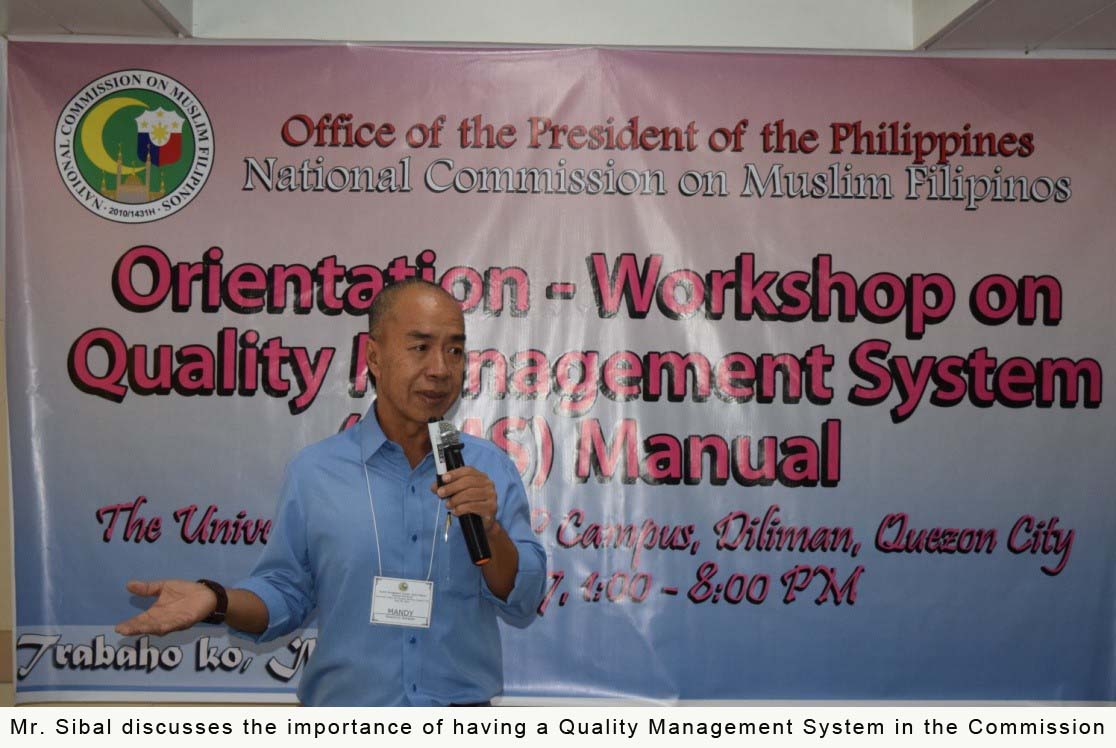 To promote understanding, Mr. Sibal led the participants to analyze the meaning of each word in the “QMS” acronym – Quality, Management, and System.

Quality pertains to the standards of services being provided while management refers to the process of dealing and controlling. Mr. Sibal noted that once the Commission set the standards it means that it should not go below that, otherwise the output is substandard. In management, he mentioned that there are things that are being controlled to achieve the goals of the Commission. He coined it as 3Ms namely, money, manpower, and machine. Following his logic, quality plus how the Commission manages the three resources the output will be depending on how the product was done. “They are parallel”, he said. For instance, if a certain project was done halfheartedly, you do not expect to have output of high quality.

System on the other hand, is a set of procedures or processes; while a process is a set of steps being followed to produce an output.

To see whether the participants understand the concepts that were tackled, Mr. Sibal instructed to group themselves according to their office/bureaus. In a piece of a manila paper, each group will write, in a flow chart form, the process that they follow in delivering outputs to their clients. 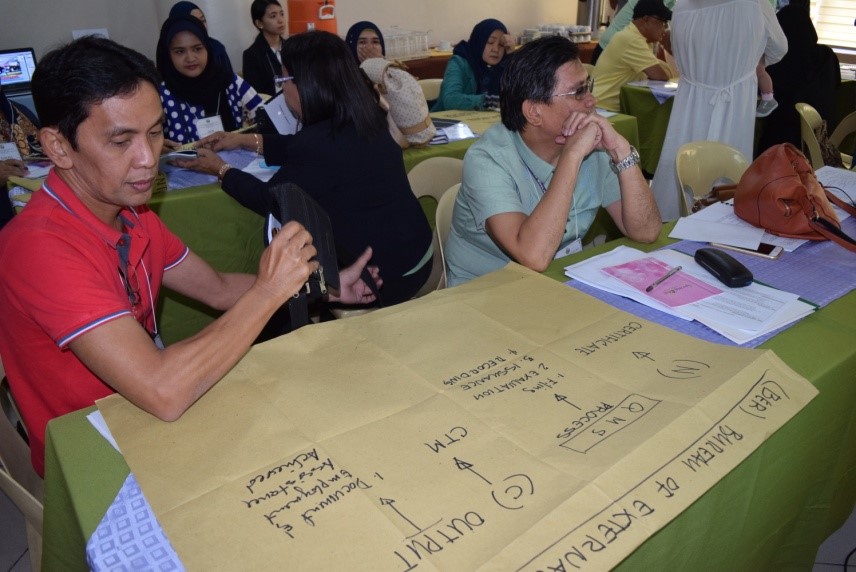 The following are the presentations by each group:

A. ADMINISTRATIVE AND FINANCE

Function: Administering the release of funds 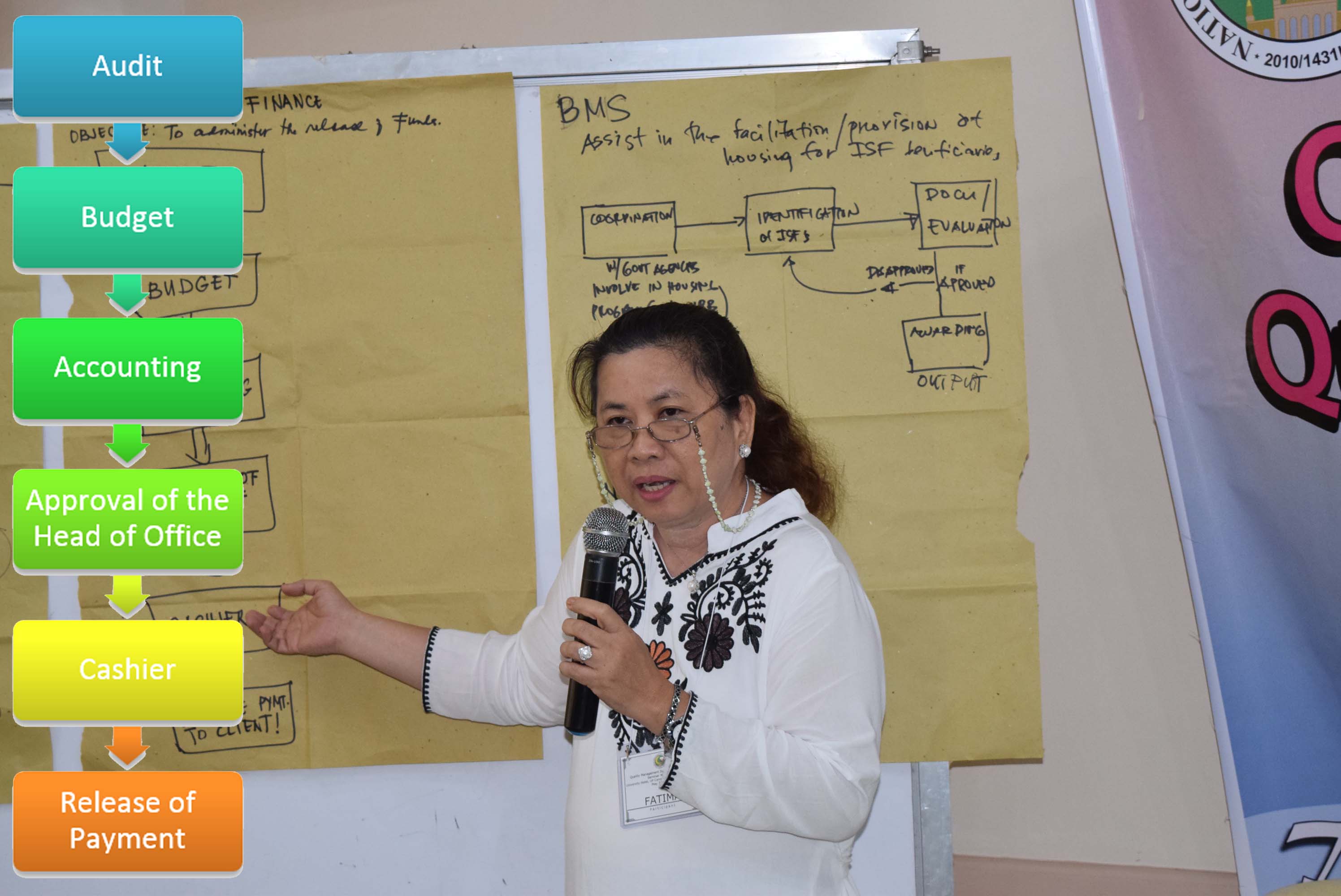 B. BUREAU OF PILGRIMAGE AND ENDOWMENT 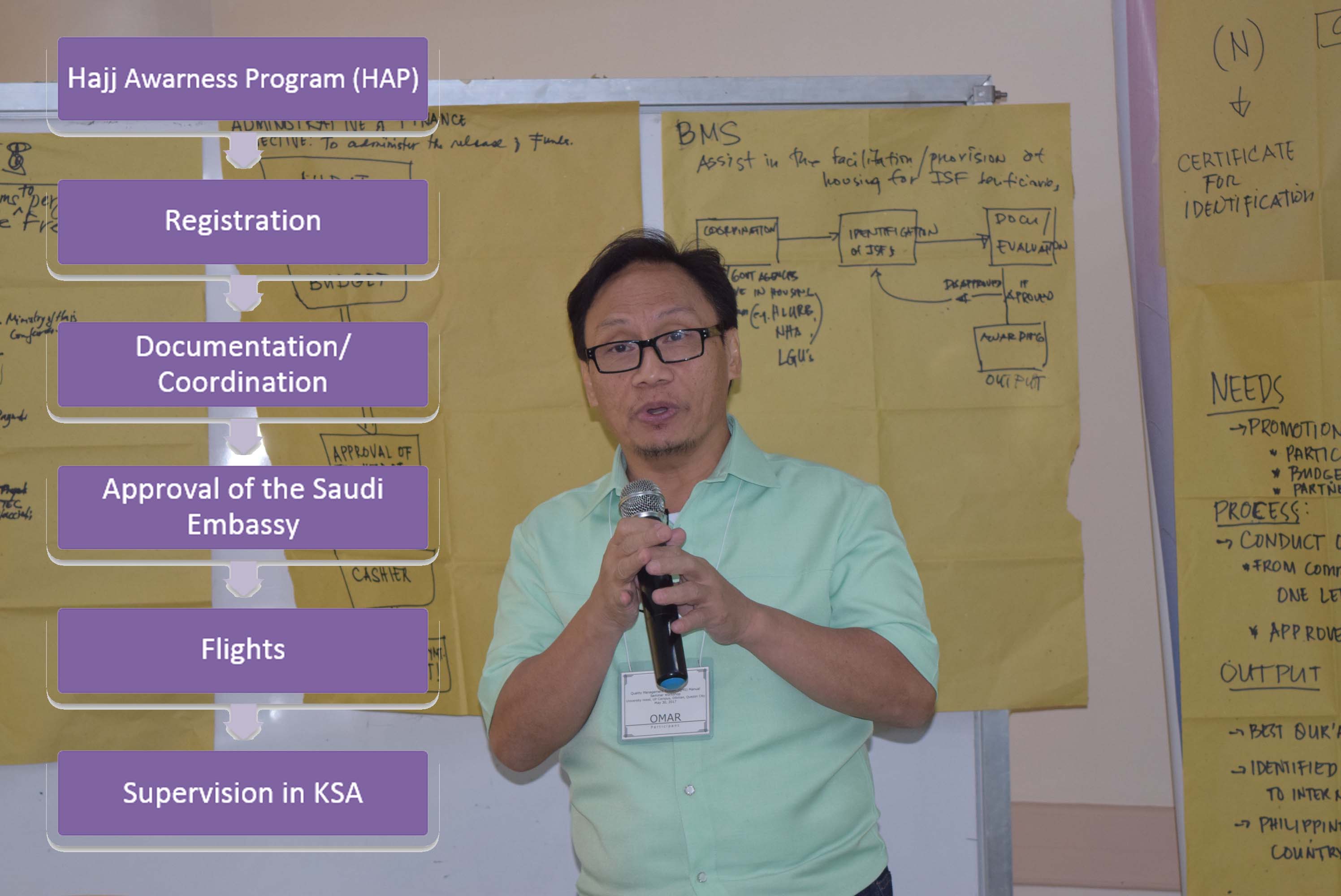 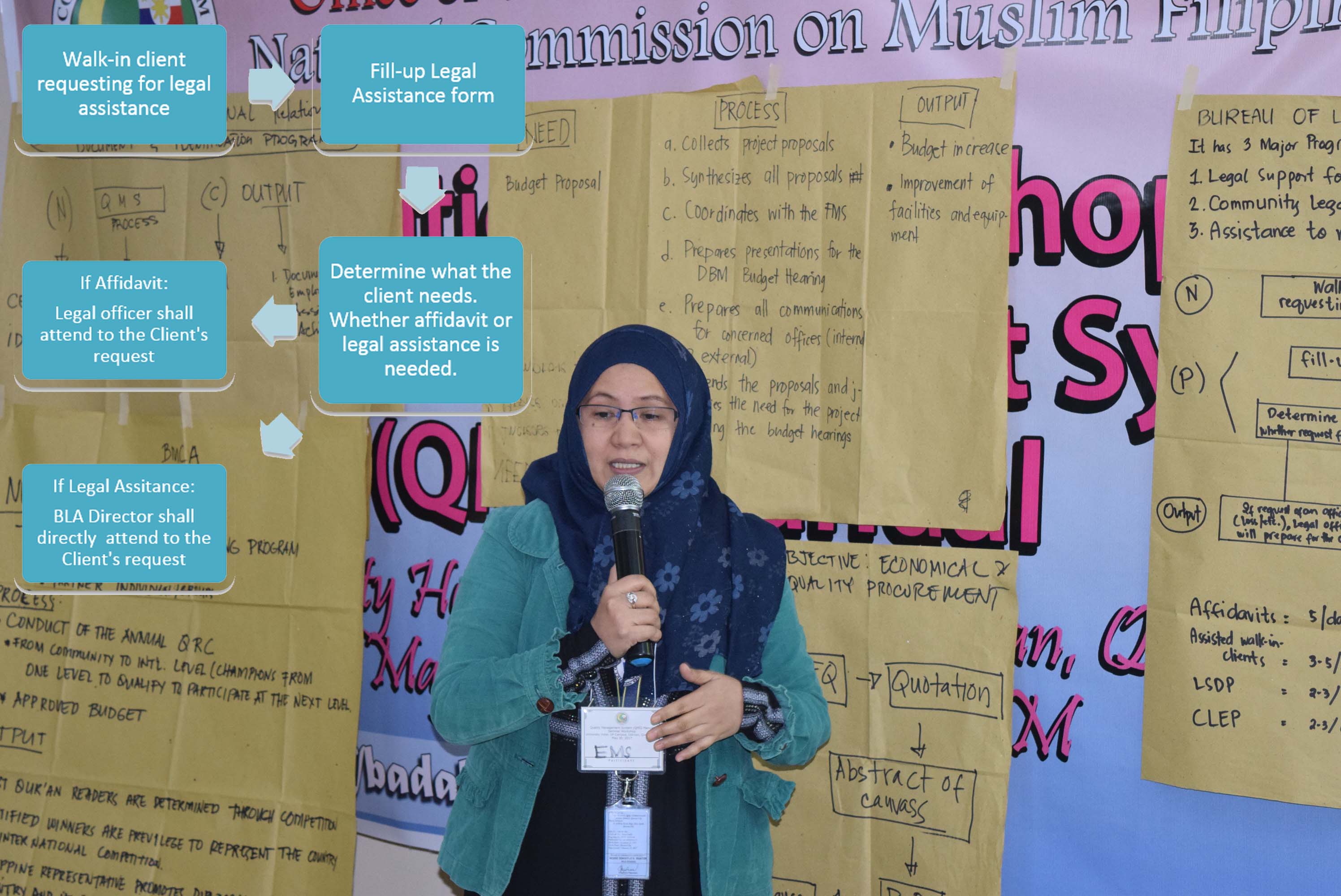 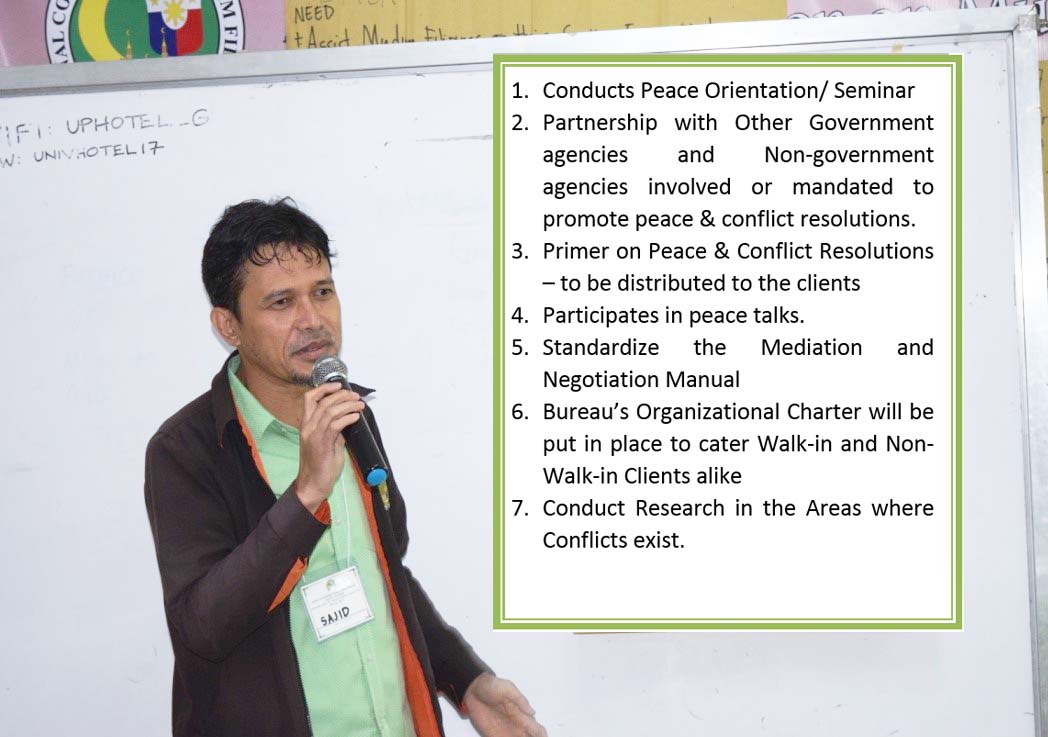 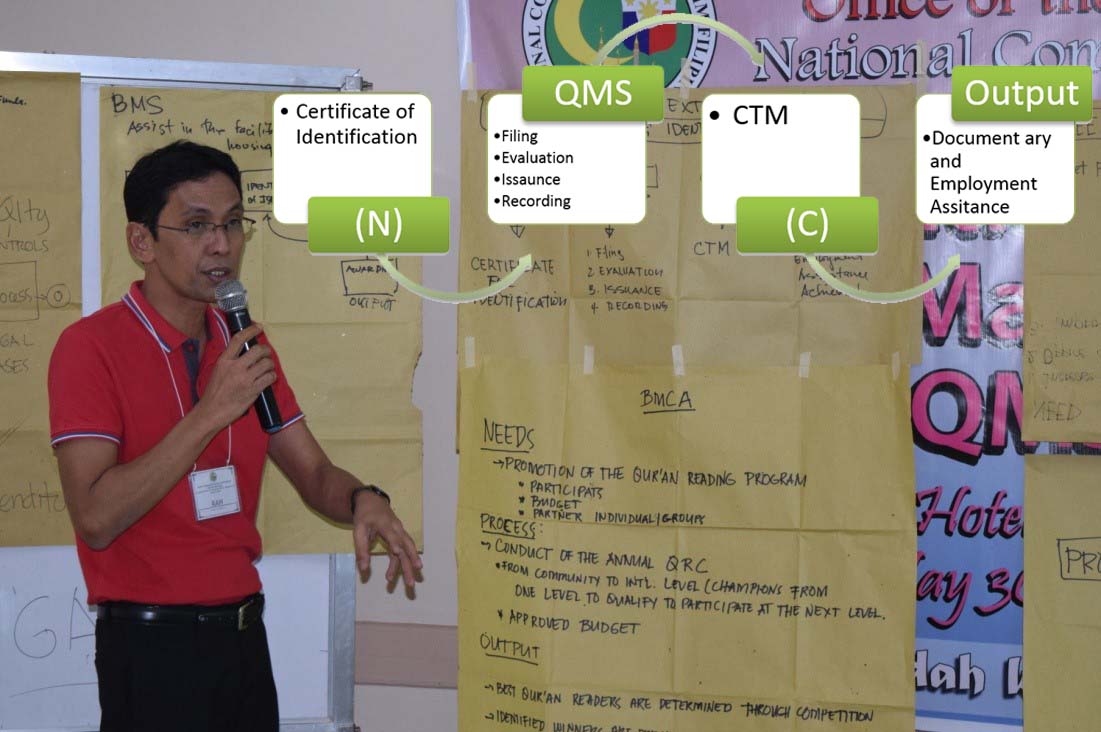 Service: Provision of assistance for the housing needs of ISFs 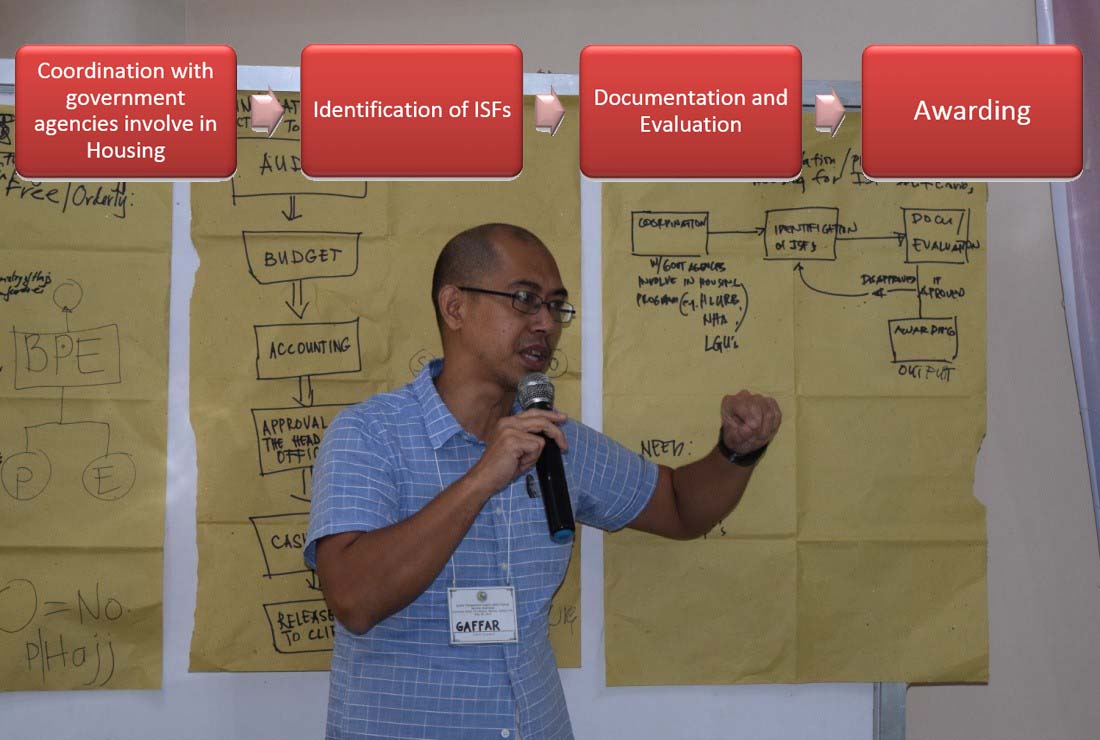 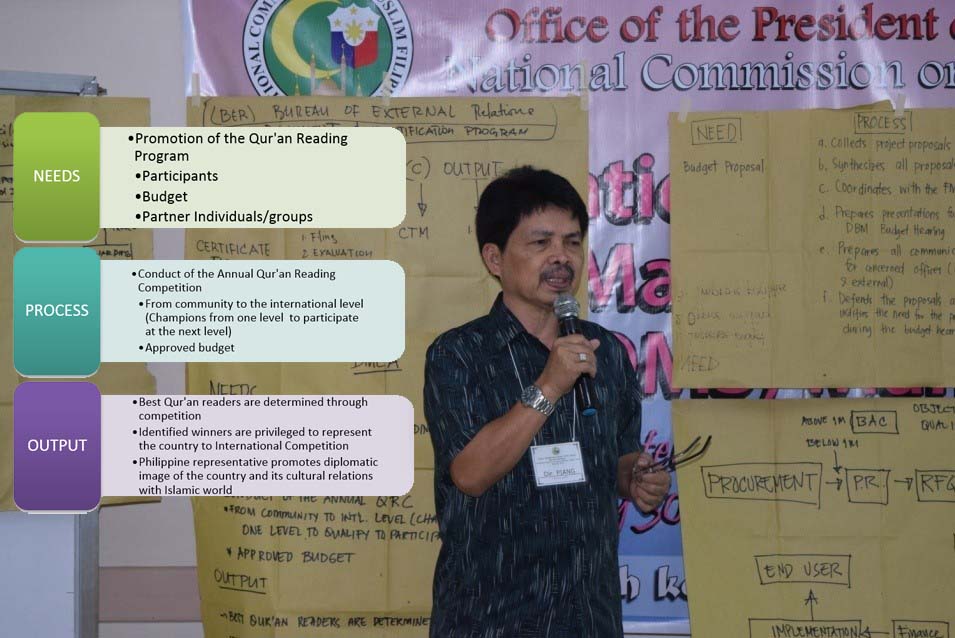 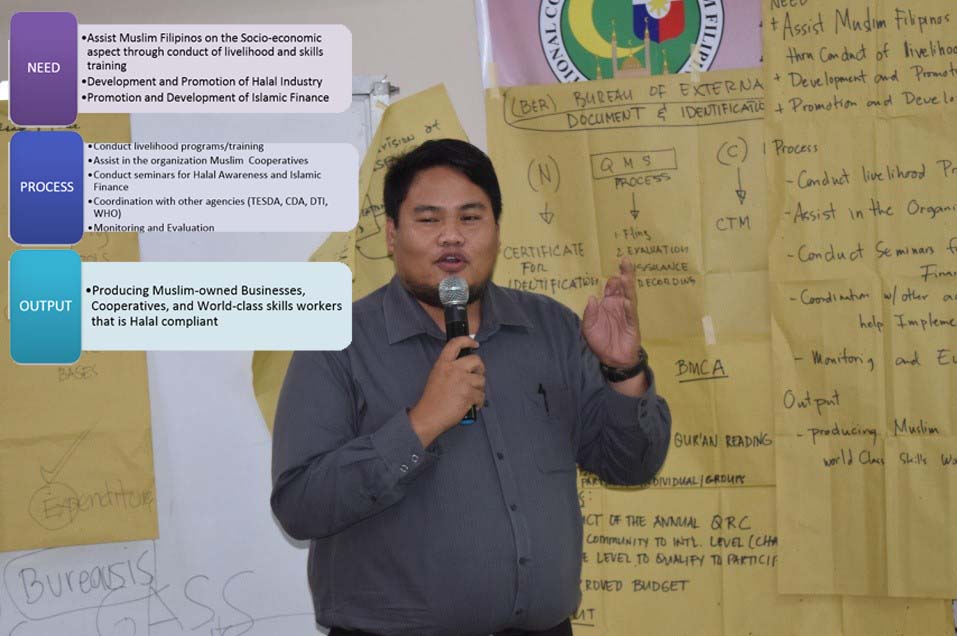 Output: Annual Budget of the Commission 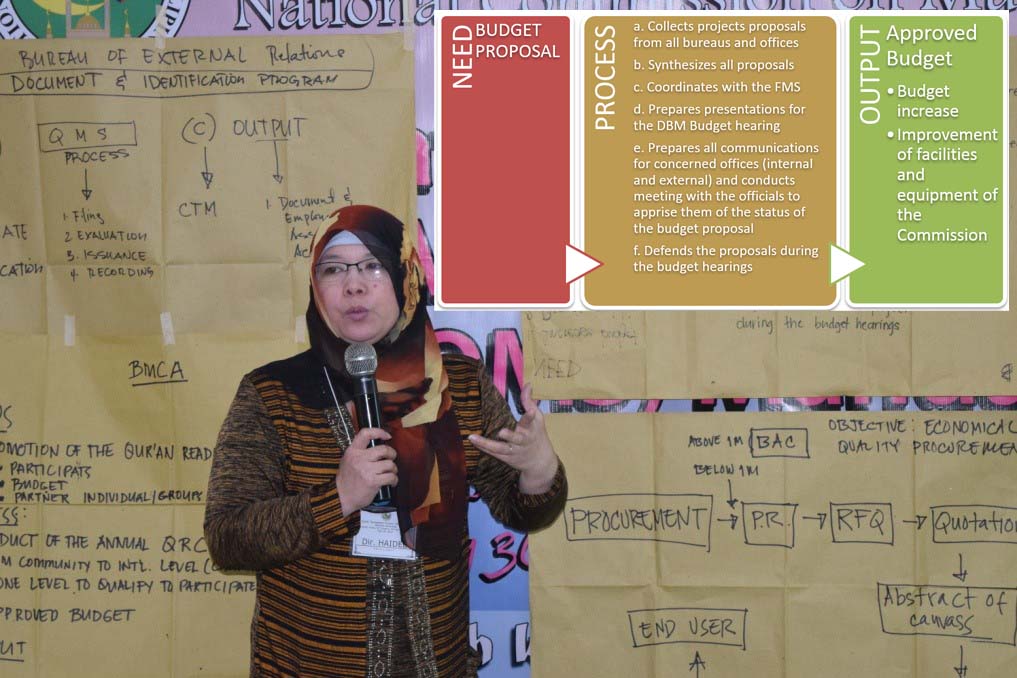 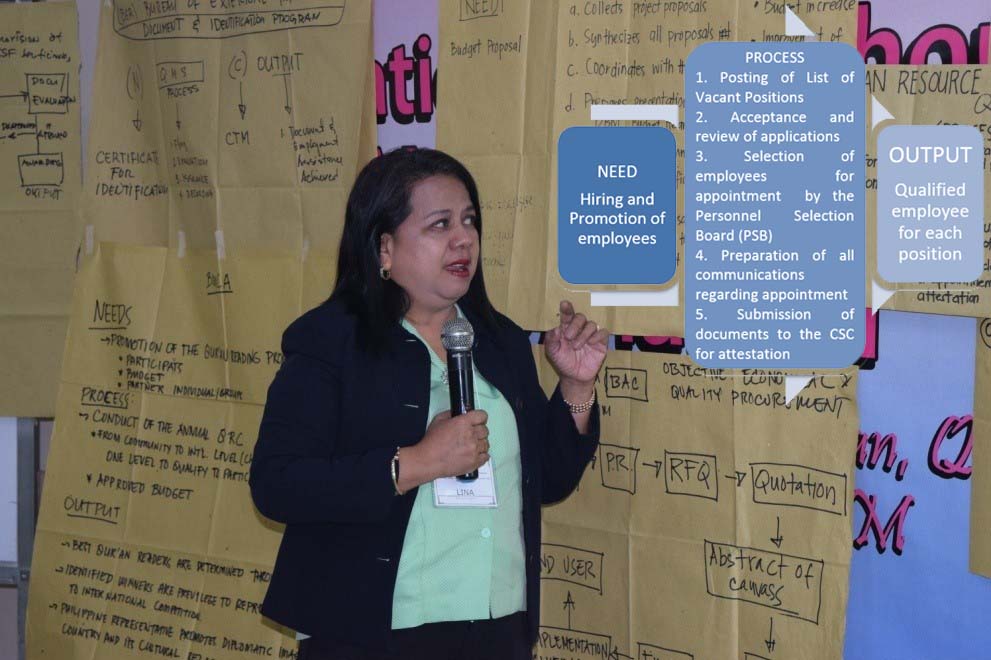 Output: Economic and of Quality Procurement 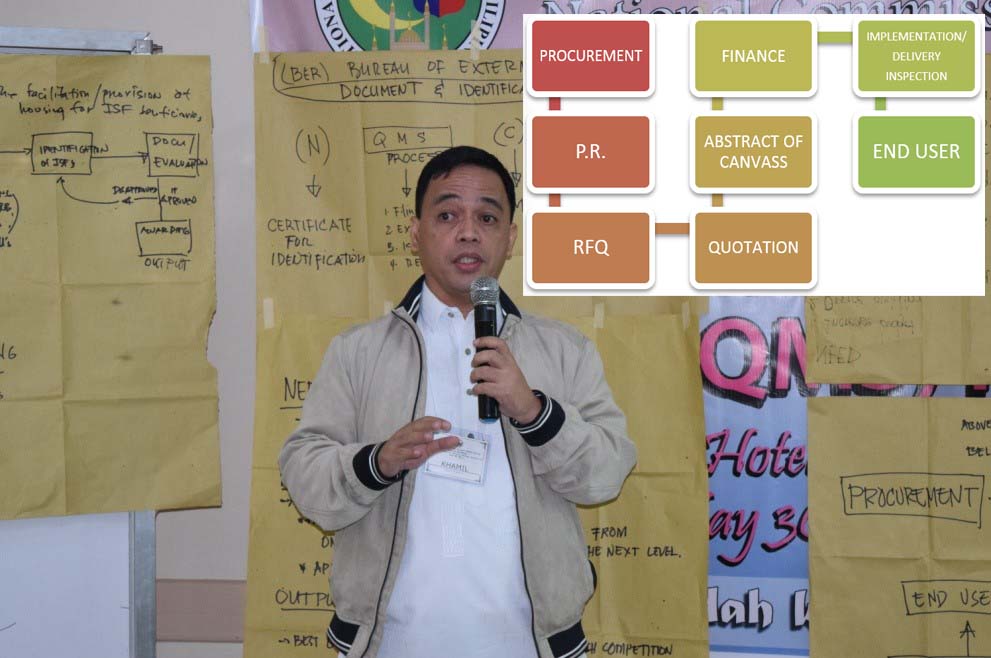 Highlights of the Discussion

On the NCMF Process Model, Mr. Sibal noted that the role of the support services or STOs is crucial in the attainment of the core processes. For instance, bureaus will not be able to implement its projects without the assistance of the Planning Service, Finance, and the Administrative Service because budget, transport service, and technical assistance will be needed in the process. Futhermore, Mr. Sibal also added that the Quality Management System is connected with the Strategic Performance Monitoring System wherein great performance from each office/bureau and each individual leads to achievement of targets, and which ultimately leads to annual grant of PBB. Mr. Sibal also highlighted that the aim of having the QMS institutionalized in the Commission is to improve the quality of services delivered to Muslims.

On the process of conducting the Qur’an reading competion, Mr. Sibal highlighted the huge role of the BMCA and the Commission in providing the country with programs that will sustain and increase the faith of Muslim Filipinos to Islam. He also added that the conduct of competitions is a perfect example of “quality” which adheres to global standards. To have Muslim Filipino winners in the various international competitions serve as a huge achievement and should be given special credit, added Mr. Sibal.

On the Quality Management System (QMS), Mr. Sibal noted that there is management responsibility, or the commitment by the management to provide quality services to Muslim clients because the support to operations (STOs) and core units (the bureaus) could not possibly deliver outputs without, for instance, provision of required resources. As shown in the diagram, there is measurement, which will tell whether the pocesses conform to the standards that were set. Furthermore, there is flow of information, which work both ways according to Mr. Sibal. Flow information is crucial for the continual improvement of the Commission as needs of clients are fast changing and the QMS strongly advocates people involvement, he addded. The satisfaction, on the other hand, denotes the satisfaction of the clients and this is one of the sources of information of the decision makers. 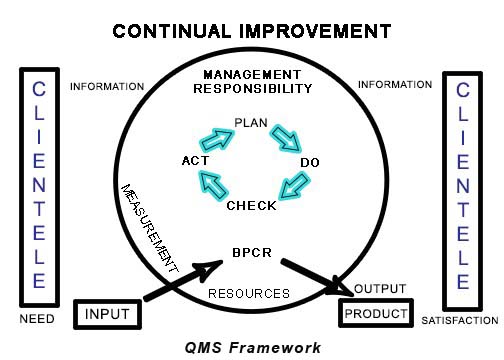 On control mechanisms, Mr. Sibal discussed that these are used to monitor non-conformities. Control mechanisms are done through planning wherein decision-makers predict and come up with preventive measures. If non-conformities are still present, he noted, then the Commission will proceed with the corrective measures that shall correct them. Similar with this is the PDCA model, the Plan-Do-Check-Act. All of these processes ensure continual improvement (see diagram above).

On documentation, Mr. Sibal emphasized that this is crucial in the process of ISO certification. There should be someone in-charge of custodianship and management of documents.

At the latter part of the discussions, Mr. Sibal discussed the ISO clauses for the QMS. He also brushed through some of the changes that were done for the current version of the ISO.